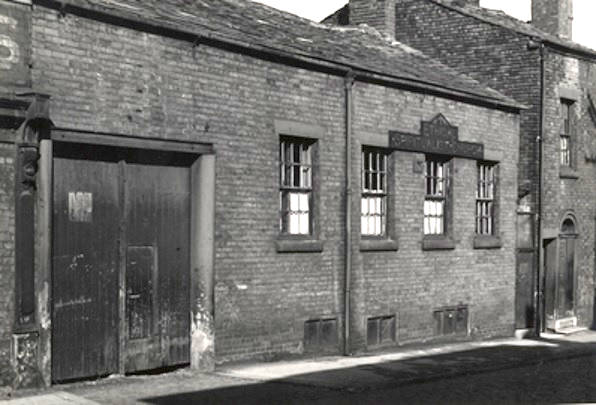 The church was first formed in 1893 and was located at an address on Lawson Street in Preston.

An announcement of the formation of a new spiritualist church in Preston was posted in the "Two Worlds" spiritualist weekly newspaper issue on 29th September 1893 by Mr F. Ogel. The announcement read; "A Society has been formed in Preston for the promulgation of Spiritualism: we had our first meeting on Thursday last, when a committee was appointed with Mr Woods - President, Mr Pearson - Vice-President, Mr Banks - Treasurer, Mr Ogel - Secretary and we would like to hear from speakers and mediums for 'expenses only', as our means are limited."

Further entries in the "Two Worlds" spiritualist weekly newspaper from the church during that period:

These updates proceed in similar vein during 1894 and 1895 when a well-known speaker on the National Federation Council: Mr James Swindle Hurst, joined them on their committee. Among the 'firsts' for the Lawson Street Group in 1895 was the first Naming Service on 26th September, presided over by a medium, Mrs Griffin.

In August 1895 a rival society appeared called 'Preston Central' and held meetings in the Central Buildings. This new group appeared to be a Break-away group who were holding public circles. In October 1895 they elected their officers: President - Mr Whittaker, Vice-President - Mr Waddington, Treasurer - Mr Cook, Secretary - Mr Wilcock’s, Librarian - Mr Begley and various Committee members. From 21st October 1895 there was a new room opened for nightly services with large attendances. By January 1896 the recorded attendance is over 400 people.

5th July 1896 The Lawson Street Group, now at the Weavers Hall, were addressed by Emma Hardinge Britten for both services.

It was in 1901 that the Spiritualists National Federation transferred all its powers to form the Spiritualists' National Union with various protections and legal and charitable status enhancements gained as a result. In 1908 Mr Airey of Preston is the President of the new North East Lancashire District Union (SNU) and is from the Preston Central Society, who have now affiliated to the SNU.

Two Worlds issue 12th November 1926 Announcement: Preston Central Spiritualist Church, Clack Yard, SNU affiliated, is moving to a new church at 140a Moor Lane Preston with Opening and Dedication on Sunday 13th November at 3pm. Doors to be opened by Mr. Cook Church President and Dedication to be by Mr G.F. Berry, who was the President of the SNU from 1920- 1921.

In 1926 the two active spiritualist groups in Preston amalgamated and chose to use the name that H. B. Tyrer gave to the group that he started.

The amalgamated group then took advantage of the vacancy of a Methodist Chapel at the lower end of Moor Lane, to move closer to the town centre, which according to the late Lena Havard would have been after WWII. Lena's husband, Frank Havard was Church President from 1980 - 1982.

The move to Newton Road

In August 2005 the church building at 7-9 Moor Lane was condemned as a safety hazard and not economically repairable and this was followed by years of services held in temporary accommodation at four different venues in Preston before a successful bid on our current building at Newton Road came about, to our great relief and good fortune!

The Official Opening / Dedication service for our current building was by SNU President and Minister Duncan Gascoyne at 3pm on Sunday 9th March 2008, at our new Church Hall: 16 Newton Road, Preston PR2 IDY

How the Church Got Its Name

The earliest reference found in Two Worlds for 'Preston Ethical Spiritualist Church', stems from 1920 where Mr Hy. B. Tyrer is named as founder of Preston (Ethical Spiritualist) Church, with use of brackets as shown, at Lawson Street, Preston, likely completely unrelated to the 'Original Lawson Street Group' that moved away from that venue in December 1895.

Source: Minister and SNU President Duncan Gascoyne from some 20 hours of research in the 'Two Worlds' Archives carried out in early 2008 at Stansted.